The well-established athletic challenges are part of Hemingway Days, a six-day commemoration of the life and work of the author who lived and wrote in Key West for most of the 1930s. The race is presented by Hemingway Rum Company — Makers of Papa’s Pilar Rum.

“This is the hottest race in Key West! Literally!” said organizer Barbara Wright. “It’s held on a hot summer night here, but the great thing is participants can jump in the beautiful Key West waters to cool off after the race and there are lots of cold libations to satisfy your thirst!”

The Paddleboard Race will kick off at 5:30 p.m. at the island city’s Southernmost Beach, 1405 Duval St. on the Atlantic Ocean. A 3-mile ocean course will challenge paddlers before they finish back at the beach.

Then, at 7:30 p.m., the popular 5K Run/Walk will begin at the Southernmost Point in the continental United States, oceanfront at Whitehead and South streets. Participants race through picturesque Old Town Key West, past landmarks including the Ernest Hemingway Home & Museum, Green Parrot Bar, the Key West Lighthouse, and Custom House as they complete the fast, flat 3.1-mile course.

On race day, a registration booth will be open from 3:00-7:00 p.m. on the beach outside of the Southernmost Beach Café. Race packets, bibs and shirts can be picked up there. Collectible race tech shirts feature images by renowned photographer Alan S. Maltz.

Afterwards, a great post-race awards beach party with live reggae music is scheduled outside in the same area and includes free food, libations, and raffles.

In addition, those competing in allchallenges will receive unique finisher medals. 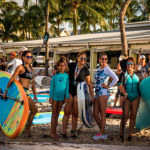