KEY WEST, Florida Keys — Runners can compete in one of the United States’ top winter half-marathons while enjoying typically balmy weather Sunday, Jan. 15, during the annual Key West Half Marathon.

Celebrating its 25th anniversary in 2023, the race attracts thousands of enthusiasts each year from around the U.S. and many other countries, drawn by the chance to run alongside the Atlantic Ocean in Florida’s southernmost island city.

An associated 5k run is planned for those who prefer a shorter distance.

The athletic action begins with the 6-8 p.m. Runners’ Meet & Greet Thursday, Jan. 12, at the Half Shell Raw Bar at 231 Margaret St. in the Key West Historic Seaport.

The half-marathon is scheduled to begin at 7 a.m. Sunday at the corner of Caroline and Grinnell streets in the seaport area. Runners follow a flat, fast 13.1-mile course through Key West’s scenic Old Town and along the Atlantic Ocean shoreline before finishing near the intersection of Caroline and Margaret streets.

After the race, an awards party and concert are planned outside the Half Shell Raw Bar.

Awards are to be presented to first- through third-place male and female finishers in five-year age groups ranging from 9 and under to 75 and over, as well as to the top overall competitors and those in the masters division.

Running enthusiasts who can’t be in Key West can take part remotely via the “run anywhere” registration option.

Entry to the Rum Stroll and Beach N’ Beer Mile are $49 per person for each event. 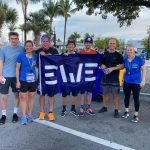