The Key West Half Marathon was recently ranked Number 1 of 14 on Runner’s World’s list of “The Year’s Best Half Marathons”. Nineteen hundred races ranged from Maui to Alaska and all over the continental U.S. The article appeared in its February issue and was compiled by veteran runners and race directors.

“The half marathon may be the perfect destination race. Running 13.1 miles is a travel-worthy goal that earns you a medal to wear proudly…. Key West may be known more for marathon drinking sessions than for running, but the town’s half marathon is trying

to change all that–or at least combine the two,” wrote A.C. Shilton for the magazine, on runnersworld.com.

More than 3,400 runners trekked through Old Town in last month’s annual event, past landmarks like Mallory Square and the Hemingway Home, then around the Atlantic. Countries represented were Argentina, Venezuela, England, Denmark, Germany, Austria, Finland, Switzerland, U.S. Virgins, Guam, Canada and 49 U.S. states. The number of participants doubled from the previous year.

With pre- and post-race events and specials like a Vendor Expo and local attractions discounts, the race offers something for every type of athlete — 5K runners, walkers, wheelchair racers, and widespread categories of awards — from kids to seniors 75 & up.

“We’re especially honored to see the Key West Half Marathon on the Runner’s World’s list,” said Barbara Wright, event founder and organizer. “The race continues to grow rapidly each year, and we look forward to an even bigger and better 17th annual Half and 5K next January 18th.”

Sign up now on active.com. Applications are also available online at keywesthalfmarathon.com. 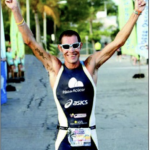 Higdon still treking and spreading his knowledgeKey West Half Marathon