There’s still time to sign up for The 19th Annual Key West Half Marathon on Sunday, January 15th,  which Competitor Magazine just ranked second in its 25 “Can’t-Miss Half Marathons” this year. The race was listed among many long-standing and well-established races such as the San Francisco Half, Alamo 13.1 in San Antonio, the Yosemite Half, and Covered Bridges Half in Woodstock, VT.

Barbara Wright, event founder and organizer, agreed with the magazine: a half marathon is “by far and away the most popular running distance nowadays. It’s still a big challenge, but not overwhelmingly so, like a marathon.” She encouraged interested runners to register now to ensure their place, explaining that the race has grown by many thousands since it began. “It draws people from all over…it’s truly become an international event.” Runners from all 50 States are signed up, plus from Seychelles, New Caledonia, Paraguay, Israel, Morocco, Moldova, Macau, Cameroon, Tunisia, Vatican City, UK, Puerto Rico, Czech Republic, Sweden, Norway, Denmark, Spain, South Africa, Canada, and India.

Continuing with its well-established reputation for an all-around fun weekend, this year’s events include an expanded two-day Expo Presented by Altra Footwear and Honey Stinger inside the Waterfront Brewery (at the Historic Seaport) on Friday from 3 p.m.-6 p.m. and Saturday, January 14th from 12 p.m.-6 p.m. Also on Saturday, a pre-race pasta special will be offered all day by the Half Shell Raw Bar, starting at 11 a.m.

The sporting challenge will begin at 7 a.m. on a fast 13.1-mile half marathon course amid the island city’s Victorian architecture, historic landmarks and harborfront businesses. A 5K run is scheduled at 7:30 a.m. for those who prefer a shorter course.  As always, live music and great volunteers will be along the course to cheer runners on. Our new sponsor Honey Stinger will have Gels available on the course. Located in Steamboat Springs, CO, Honey Stinger makes convenient, nutritious and great tasting honey-based foods including snack and energy bars, protein bars, organic energy gels, organic waffles, gluten free organic waffles, organic chews, and kids’ organic snacks.

On Sunday, an awards ceremony and  party takes place outside Half Shell Raw Bar with a concert by Howard Livingston & the Mile Marker 24 Band, and free micro brewed craft beer from Concrete Beach Brewery.  New this year is a VIP beer line for the largest group of participants at the post-race party. In true Key West style, the party will also include food, free raffles, great winners’ prizes (including Caribbean Trips) and more!!

Awards await the first- through third-place male and female finishers in five-year age groups ranging from 9 and under to 75 and over, as well as the top overall competitors and those in the masters. Again each entrant will receive a gender-specific fully sublimated race shirt.

Unique and collectible wine topper medals will go to all Half Marathon finishers and dog tag medals to all 5K finishers. During race week, participating runners can enjoy Paddle Yoga and Paddle Fit trips by Lazy Dog Outfitters on Thursday and Friday.

Part of the race proceeds benefits local charities, the majority of which goes to the Key West Sunrise Rotary Scholarship Program, which helps hundreds of local students; various local school teams such as those at H.O. B. and Key West High School; FKCC Youth Swim Program; Zonta, and more. 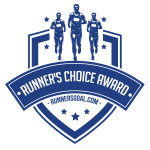 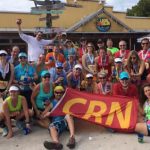